Hello Freedom students!  Today, I bring you a great quote from Steve Jobs.  Surely, you must know him!  Steve Jobs was born on this day, February 24, 1955 in San Francisco.  He was adopted at birth and was raised in the San Francisco Bay area.  He created Apple in 1976, but left the company in 1985.  After that, he worked on NeXT, a computer development company and helped to found Pixar.  In 1997, Jobs rejoined Apple and helped make it one of the biggest computer and technology company in the world.  Unfortunately, Jobs passed away due to cancer in 2011. 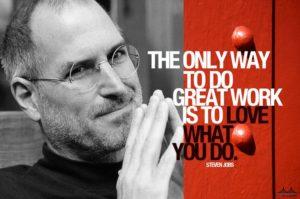 Do you agree?  I love my work, and it makes every day so easy!  Do you love your job?  What would you love to do?  Let us know in the comments below!